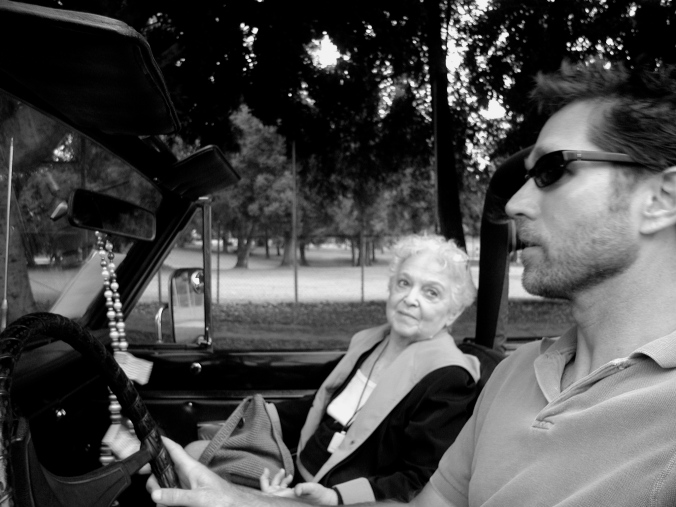 IT’S BEEN 2 WEEKS AND A DAY SINCE THEY BURIED MY FRIEND RUTH. I felt bad that I wasn’t able to make it to her funeral back in LA. But I know she understands.

Nearly 10 years ago I was introduced to Ruth by the director of Friends to the Elderly, a Jewish charity I began volunteering with in ’94. Despite what Glen Beck may think (and clearly he’s not doing much of it on this issue), I didn’t get into volunteering out of some latent Communist or Socialist leanings. Yeah, right, dude.

I got involved in the Friends to the Elderly program because I’ve always enjoyed the company of old people. Especially my grandparents, and they had all passed away by the early ’90s. And I’d already had a life-changing experience volunteering at the Hollygrove orphanage a few years before that.

So it wasn’t surprising that I’d grow to love Ruth. It didn’t take long, either.

I dare anyone to look at this slideshow I just posted on Flickr and tell me that Ruth and I didn’t have a good time over the last decade.

Beck’s cheap political rhetoric sounds vulgar when you’ve lived and breathed the volunteer experience. At least that’s how it sounds to me. Not only did spending time with a stranger grow into a beautiful friendship for a lonely woman at the end of her life.

It also reminded me time and time again how good it feels to put a smile on another human being’s face. And how deeply satisfying it is to cultivate selflessness when my impulse is often selfishness.

At the end of the day, my selflessness became a sort of selfishness. Because by listening to Ruth—by just showing up,  swapping life stories and comforting her when she was scared, confused or lonely—I was easily getting as much, if not more, out of our visits than Ruth was.

That’s what the Glen Beck’s of the world don’t get. We’re not brainwashed little monkeys here. We volunteer because we think we might somehow scrub clean our shortcomings and maybe even fight back the tide of greed and narcissism choking our culture. We volunteer because we like making people happy and we know that if our intentions are pure, there’s simply no way the experience will be anything less than transforming.

And chances are, you’ll have some laughs.

Thanks for the good times, my sweet friend.

You will be missed.

One thought on “goodnight, ruth”