“Praise youth and it will prosper.” ~Irish proverb 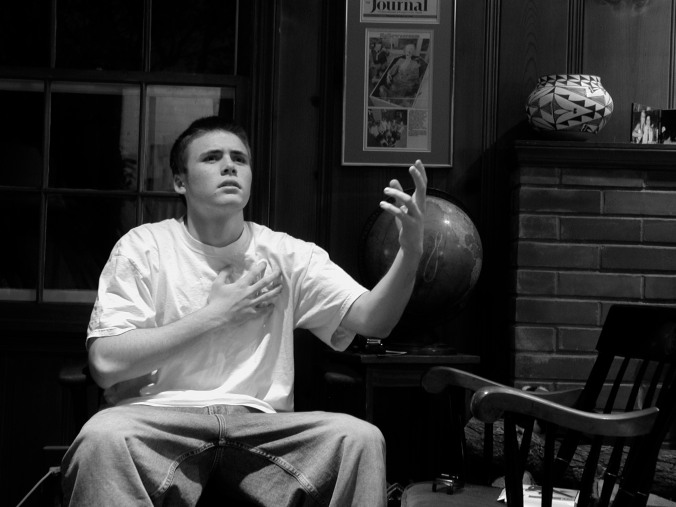 CUTTER IS A GREAT KID.

Even though — or maybe because — he loves to scare people. He’ll fuck with his friends.  His mom.  Complete strangers. No one is immune to his zen-ish yen for toothless mayhem.

The wallpaper on his iMac is a hilarious picture of the exact moment he snuck up and doused one of his friends with cold water in the shower. In the video snapshot, the unsuspecting kid looks like a wet, grimacing Lee Harvey Oswald getting capped by Jack Ruby.

Only, Cutter’s weapons of choice were a cup of ice water and a digital camera. Delivered with an impish chuckle, no doubt.

The night I met Cutter, my friend GC’s 17-year-old East Coast cousin, he told me about the plot he’d hatched up recently. A plan in which he assembled a team of his high school buddies to kidnap one of their friends. Using ski masks, toy guns and a getaway van, no less.

“Just to scare him,” said Cutter, the kid with the Disney grin and the Pulp Fiction heart. “Believe me, he deserved it.”

The plan came off perfectly — until the kidnappee broke free and ran screaming back to the house party from where he’d been snatched. Cutter cracked up as he watched the whole thing go down from the shadows nearby. When I asked why he didn’t participate in the abduction, he said he couldn’t.  “I would’ve started laughing. I always lose it in those situations.”

(By the way, the kid who got nabbed later got his revenge when he hid a few dead fish in Cutter’s car. One of the fish wasn’t discovered for weeks.)

Cutter also showed me video footage of him jumping out from behind a door and scaring the crap out of Professor Lisa, his patient mother.

Apparently, this sort of thing isn’t that uncommon in their household.

“Today Cutter was saying, ‘I’m pissed at Bob.’ He’s been checking your web site all the time.”

Cutter’s mom is giving me a much-deserved dose of shit. I’m back in LA. Sitting on the blue velvet Pottery Barn sofa slipcover I paid $400 bucks for 5 years ago. In the near-empty office at P.’s apartment. MY old apartment.

It’s been over a month since I spent an unforgettable week in Arlington, VA with Cutter and the Professor.

“I warned you guys,” I’m telling Professor Lisa. “Didn’t I? I said it could be a day, it could be a week before I get around to writing about my visit to Arlington. It could be a few weeks, it could even be a few MONTHS. Did I not warn you guys?”

I don’t blame Cutter for being annoyed. After all, I did have a memorable, action-packed week at his house.  A turn of events that was completely unexpected, seeing as how I assumed I’d stay for a day, maybe 2.

I’d never met these guys before I showed up on a Monday night at their side door. The door just off the kitchen. The one, I later found out, no one ever goes to when they first come to the house.

I’ve known my friend GC for over 10 years. I even lived with him for 18 months. And I don’t recall ever hearing him mention his Aunt Lisa and cousin Cutter.

Cutter was getting ready for basketball practice when I showed up that night. He seemed a bit reserved at first. He must have been thinking: “Who the HELL is this guy?”

Still, he took me upstairs to the room I’d be staying in. It was twice as big as his tiny room at the top of the stairs, where I noticed ESPN: The Magazine and the latest Sports Illustrated on his messy floor.

I soon found out he was a shooting guard on the Washington-Lee High School basketball team. As 1 of only 2 sophomores on varsity last season, he didn’t play much. So this is a big year for him to step up.

When we got back downstairs I sat at the kitchen table. Giving the Cliff Notes version of my story to Cutter, the Professor, Cutter’s best friend William and William’s mom Sally. The 4 of them were immediately friendly and genuinely curious. Cutter, in fact, was so engaged in our conversation that he was almost late for practice.

An hour later, he came rushing through the house as the 4 of us sat having dinner.

“What are you doing home so soon?” his mom yelled out as her son scampered by.

“I forgot my shoes!”

And then he was gone. Out the door. In the car. Back to practice. Leaving the rest of us shaking our heads. The Professor finally broke the silence.

“So what’s he been doing for the last HOUR?”

So you might be thinking: Okay, so he pulls pranks and forgets his shoes. THAT makes him the coolest teenager in America?

No, not JUST that. He is, however, able to make mischief and forgetfulness endearing. But after only a week, I noticed at least 7 other factors that put him in the race for Coolest Teenager In America:

1) He is talented. The night I rolled into town he showed me some of the video shorts he’s made with his iMac/DV camera setup. They were pretty damn good, too. One of them, a long chase scene with a Tarantino/Scorcese vibe, had just been accepted into a new film festival for D.C.-area high school kids. And he’s getting an “A” in his screenwriting class at acclaimed H-B Woodlawn High School. Look out, Hollywood!

2) He is curious. He asks questions that let you know he’s actually listening, a reportedly rare quality in teenagers. “Are you religious?” he asked me during our first late-night discussion. “What’s your take on spirituality?” The question left his mom beaming later. “How many kids ask that kind of question?” gushed the Professor.

3) He‘s responsible. He claims he never smokes or drinks. Until proven otherwise, I‘ve gotta believe him. “I don‘t want to have that feeling of losing control,” he told me and his mom. “I laugh enough without that stuff.”

4) He‘s kind.  I don‘t have any concrete evidence. But he strikes me as the sort of guy that would stick up for the nerd getting picked on at school.

5) He‘s resilient. I went to one of his basketball games. Immediately afterwards, he was grumpy. He thought he sucked. An hour later he was cracking up as he put on his thrift store sport coat and pimp glasses, getting ready for the winter formal. And he laughed when his mom and some of her students punk‘d him when he came home from another game in a bad mood.

6) He‘s humble. Named for the type of boat he lived on for the first 3 years of his life, Cutter looks like one of those kids on the WB. He  ‘s smart, funny and has great taste. (He loves Tarantino and I turned him on to Bottle Rocket.) Yet he’s confident without being cocky. And his stomach still churns when he likes a girl.

7) He loves his mother. He shares her curiosity and her goofy sense of humor. Even when he‘s giving her shit there‘s an undercurrent of affection and respect. How many teenagers stay up ‘til 2 on a Saturday night with a buddy laughing with their mom?

If he keeps this up, White Gold — as he jokingly calls himself on his voice mail — is about 10 years from being every potential-mother-in-law‘s dream come true. Proof of what a little praise, nurturing and good parenting will do.

Now if we can just get him to stop playing with toy guns.